I visited 96th Street Steakburgers once before, long ago, right after they opened. I can’t remember the meal as being overly great or bad. I’ve been on a steakburger kick lately, so I decided to drop by for lunch with Anita and a co-worker of hers.

From the outside, 96th Street Steakburgers makes you think “steakburgers”. It has that old diner kind of feel. Inside, it is fairly sparse, with a cold concrete floor that makes a horribly loud noise when people drag their chairs across it. But hey, I’m not there to marvel at the floor, I want a burger.

Ordering is easy. Just walk on up to the counter. We were there early so there wasn’t a line. Most likely you’ll order like we did – from the combo menu. I ordered a #2, which is a double cheese burger with fries and a drink. I supersized it so I got more fries and a bigger drink. Anita had the #1, which is a single steakburger with fries and a drink. You get a ticket with a number and wait for it to be called when your meal is ready.

At first glance, everything looks great. The fries look inviting, and they are tasty, but they were a bit soggy. The burger toppings were fresh, and the patty was cooked perfectly, but it could’ve used some seasoning. I’d have to say that the best part of the burger is the secret sauce. Without it, the burger wouldn’t have been much different than one from Steak ‘n Shake. With it, it’s not bad, just not anything to make me dream about it eating it later that night.

I found the restaurant to be in need of a decent cleaning. Being the first customers of the day I would’ve expected the tables and floors to be sparkling clean from the night’s cleaning, but they were not.

I was a little disappointed with our experience. With just a little effort (cleaning, seasoned patties, and crispier fries), 96th Street Steakburger could easily be on our regular dining rotation.

On the ‘Mater Rater I had to zing 96th Street Steakburger for the reasons I mentioned. 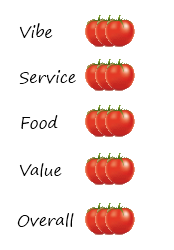