Boy, where to even begin. Let’s start with the easy part: I was beyond pleased with Margaritaville: The Cookbook. I bookmarked darn near every recipe in it. By the time I reached the last page I was excited, chomping at the bit, to get started making everything I had tagged. What I thought would be a boring restaurant copycat cookbook couldn’t be farther from that. This is great stuff.

One of the authors of Margaritaville, Carlo Sernaglia is the Concept Chef for the Margaritaville brand. He’s not fooling around. What’s in the cookbook is often the same food you can get in the many Jimmy Buffet-owned or licensed restaurants. And we’re not talking 10 or 15 recipes here either. There’s page-after-page of them, from breakfast to appetizers to desserts to drinks. Everything.

As you’d expect, many of the recipes have an island theme. But not all. I found the ingredient lists to be very accessible. No need to scour the internet to find some bizarre ingredient and have it cold-shipped to the house.

The breakfast section has some nice island-y twists on classics, like huevos rancheros, omelets and pancakes. For example, the South Florida eggs Benedict. What’s different? The Key Lime holandaise, which has, yep you guessed it, key lime juice mixed in. A nice refreshing citrus variation that I cannot wait to make.

The appetizers have a seafood theme, from crab dip to lava lava shrimp to fried oysters. I am pretty sure i bookmarked every recipe to make and make soon. There are a ton of appetizer recipes. Since I’m a big appetizer kind of guy, this was my favorite part of the book. I consider appetizers to be side dishes and often serve them instead of sides.

The list of salads and soups were all light, refreshing and include the steps for making the same dressings you’ll find in the restaurants.

The section on burgers, sandwiches and hot dogs reminded me of the appetizers: I bookmarked everything. Specially the Cheeseburgers in Paradise with Paradise Island Dressing. We live near (but not near enough) the first Cheeseburger in Paradise restaurant. Having a copycat of their delicious namesake burger is a win. A big win.

Next up, main dishes. Everything from fried chicken, to tuna steaks to jambalaya. Something for everyone, and each with a nice twist from the normal versions you’d expect.

You gotta have sides (or at least, appetizers!), and this book has lots of great ones. At the top of my to-do list: JWB (as in James William Buffett) creamed spinach, Yukon gold loaded mashed potatoes, and spicy red onion rings. Yep, onion rings made with red onions. Where have I been that I haven’t made those yet?

You knew that the dessert section would have a recipe for Key Lime pie. And it does. How could it not? And also crispy bananarama. No, they don’t serve the band Bananarama. It’s a flour tortilla smeared with Nutella and topped with nuts and cinnamon, then rolled around a banana and deep-fried. Yes, I bookmarked it. Of course I did.

Last up, the drink section. Like the book (and song) says, it’s 5 o’clock somewhere and this book doesn’t leave you looking somewhere else for good tropical drinks. No matter what your indulgence, there’s a drink in here for you. Don’t forget the little umbrellas.

Margaritaville: The Cookbook wraps up with 3 non-recipe but totally useful sections. ‘Party Menu Suggestions” gives you menus for different theme parties, like ‘backyard beach bbq’ or ‘dockside dinner’ and ‘build-your-own burger paradise’. All
the work has been done for you including suggestions for decorating. ‘Recipes Organized By Fun’ gives you menus for different activities. Going on a boat ride? Tailgating? Looking for some menu ideas for a grill-out? This section, like the party menu suggestion section, does all the work for you, giving you a full menu no matter the activity. Last up, the ‘Party Tips’ section, although short, contains some ‘why didn’t I think of that?’ ideas for your next party. Little time savers and things that will make your next party a lot easier and a lot less stressful.

On my ‘Mater Rater scale Margaritaville: The Cookbook gets top scores across the board. I don’t even have to think about it. 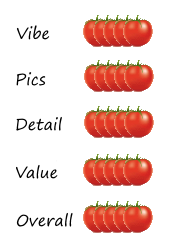 One of the first recipes I made from this cookbook was the BBQ Island Club sandwich. It’s a wonderful spin on the classic, and something I’ll make again.

For more of my reviews of cookbooks available for the Amazon Kindle readers, visit Kindle Thyme.