Note: At this point, I’ve only made beef-based jerky in my Snackmaster Pro. I will update this page as I delve into other meats such as poultry.


I love my Nesco Snackmaster Pro. And although I’ve only owned it for a short time, I’ve made batch after batch of delicious jerky. There are many resources on the internet on making jerky, but I couldn’t find a single simple guide to making jerky easily, so I put together this little page. If you have any experiences or suggestions, please use the comment form at the bottom of this page so I can share them with others.

The Snackmaster Pro comes with 5 trays and 2 mesh sheets. I’ve found that I can make around 3 pounds of jerky with the standard unit. I’ve since added more trays and mesh sheets so I can make more at a time. Note that you should always have at least 4 trays in the unit when operating it. I use the mesh trays only when making jerky from ground meat.

I have only made beef jerky using top round. It’s a very lean meat and can often be found on sale. I place the meat in the freezer for 90 minutes then slice it thin (3/16″ – 1/4″) using a meat slicer. You have to have a nice consistent thickness to the meat. If you don’t have a slicer have your butcher cut the meat. Do not attempt to cut it by hand.

I have made jerky from ground chuck and ground top round. I’ve found both to be fantastic. I trimmed my own chuck roasts and then ground them myself. You want as lean a mixture as possible. If you can’t trim your own meat before grinding I recommend that you buy the leanest possible ground beef from your butcher. Fat in jerky can go rancid quickly so if you use a fatty meat you’ll have to eat the finished product soon after preparing it. Not that that’s a bad thing!


I use a jerky gun to make ground beef jerky. It’s the coolest thing ever, basically a large caulk gun that you load with ground meat. It comes with two tips: one for making Slim Jim-like jerky and one for making flat jerky. Just load it with marinated meat and pull the trigger. A nice consistent trigger action will produce a great consistent jerky. Like I said, it’s just like a caulk gun!

I make my marinade and then add to the beef in a large resealable bag which I then place in the fridge overnight, turning and massaging every few hours to get the marinade well-distributed. I put the bag in a large plastic container on the off chance it comes open and leaks.

Note that when I use commercially available marinade mixes I always add a bit more seasoning than the instructions call for. My experience has been that the standard recipes produce a fairly lightly flavored jerky. Experiment with the amounts until you get the flavor you desire.

I always set my Snackmaster Pro to the highest temperature when drying meat. I do not overcrowd the trays – you don’t want the meat to touch or overlap or it won’t dry consistently. You can fit about a pound of meat per tray but to be safe, plan on using two trays per pound.

I dry my ground beef on the mesh trays. I’ve found it doesn’t stick and makes for super easy clean up. Regular jerky meat strips can be done on the trays without the mesh liners.

Every 2 hours I rotate the trays by moving the bottom two trays to the top of the stack. The top trays will dry quickest. Rotating them helps ensure a nice consistent drying across all of the trays. I usually start checking the meat after 5 hours (or 4 if I’ve cut the meat particularly thin). If I am making more than one flavor of jerky at a time I label the dehydrator trays using blue painter’s tape. I use numbers, but you can just write the flavor on their too if you want. Whatever works for you! 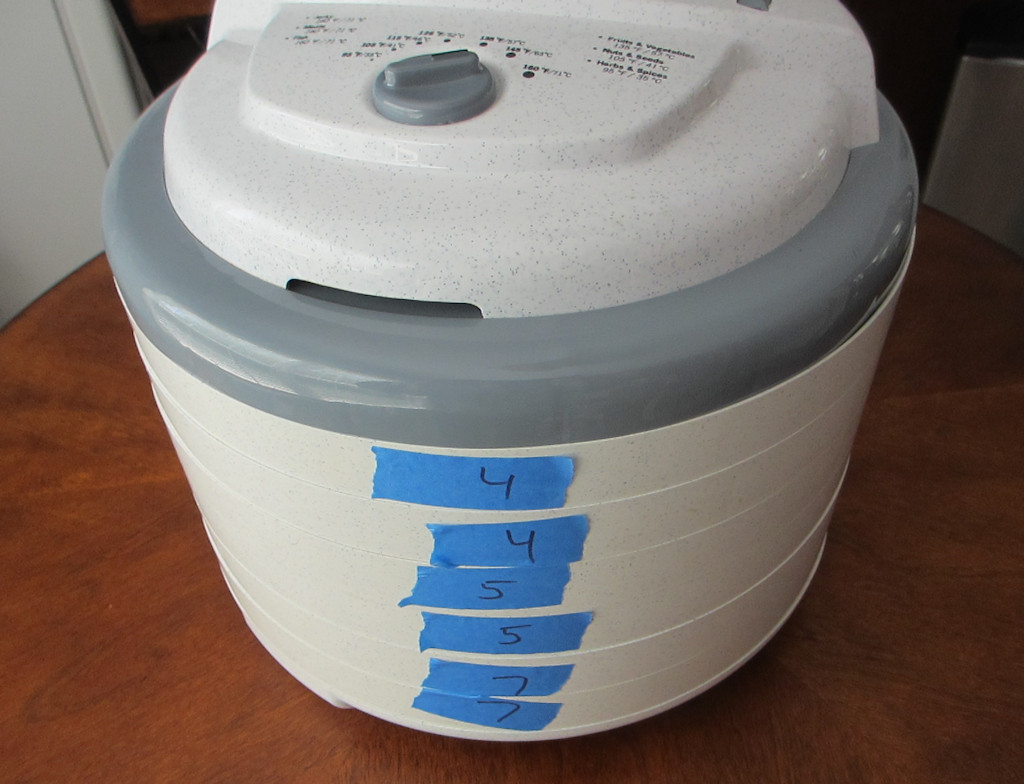 When the meat is done I remove the top of the dehydrator and let the unit cool for 30 minutes. If the mat was fatty I will dab it with a paper towel to remove any oil.

I store my jerky in plain old paper lunch bags if I have cured the meat (see nitrites below), or resealable baggies in the fridge if I have not used nitrites.

I often cure my meats using pink salt (sodium nitrite) so that I am not required to refrigerate the final product. You do not have to use pink salt (many commercial seasonings come with a packet of sodium nitrite), just keep your meat in the fridge after drying. If you do use pink salt NEVER EVER taste it. Once you mix it in with your marinade your tasting days are over until the meat is done.


Well, that’s all for now! Good luck and enjoy your jerky!