I usually cook ribs, chicken, turkey, or my favorite, chicken wings, on my Char-Broil The Big Easy TRU-Infrared Oil-less Turkey Fryer. I noticed that red bell peppers were on sale, and that got me to thinking about canning some roasted red peppers on the Char-Broil Big Easy. Normally when I roasted bell peppers I toss them on the grill for a while, but this time I loaded up the Big Easy basket and the Char-Broil Big Easy Bunk Bed Basket with 9 peppers (the 10th one wouldn’t quite fit, and you don’t want to crowd them).

I lowered the basket into my preheated Big Easy and let the peppers roast for a 45 minutes (I’d go 30 minutes if you want your peppers to have a little more ‘bite’ to them).

I wanted my peppers a little on soft side. If you pull yours out sooner, just keep in mind you might have to steam them a bit longer to get the skins off.

The peppers then went into a large bowl, which I covered in foil and let steam for 10-15 minutes to make the skins easy to remove. Be careful opening the foil (or handling the peppers) as they will be hot!

After letting them cool slightly, we cut out the stems and removed the skins. The peppers were then ready to can (see below for how we canned them).

Save a few of the roasted red peppers to add to some smoked sausages with kraut, also cooked up perfectly on your Big Easy. 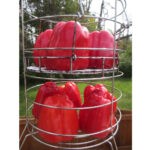 For the roasted red peppers

For canning for every 2-3 roasted peppers (depends on size, so I’d have a few extra jars and a little extra vinegar mix on hand just in case)

For the roasted peppers