I can’t imagine an easier way to make fantastic-tasting, moist, tender chicken than on the Char-Broil Big Easy. It’s so crazy easy to do that it’s bordering on effortless. I picked up a jar of Famous Dave’s Country Roast Chicken seasoning at the grocery store, along with a whole chicken (on sale! Woo hoo!). A little oil and about 2 hours later, boom! My goodness was it good.

You would’ve thought I’d spent hours to produce such wonderful roasted chicken flavor. And would I admit to eating too much of that delicious crunchy skin? Maybe.

I used the new Big Easy Better Basket in my Big Easy. It collapses down, which is great for storage. It also is bigger than the standard Big Easy basket so you can cook a lot more at once.

I was cooking a 5 pound chicken. As you can tell, I had plenty of room for a much bigger chicken (or turkey!). 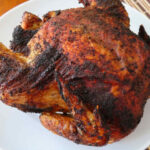