If you’ve ever marinated chicken in Italian salad dressing, then you can begin to have an idea of the flavors State Fair Chicken BBQ sauce will bring to your next chicken cooked in the Char-Broil Big Easy. I say ‘begin to’ because State Fair sauce is so much more. It’s vinegar-based, and all-natural. It adds tremendous flavor, and tenderness and juiciness to boot. As an added bonus it smells great while it’s cooking too!

Like Italian dressing, State Fair Chicken BBQ sauce is not only great as a chicken marinade, it can be used on salads just like a salad dressing. This stuff is good. Get you some!

Also try my Chik’N-Lik’N chicken and my Old Colony chicken, both made on the Char-Broil Big Easy. 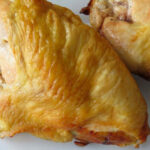