I’m a big fan of cooking honey-chipotle glazed ham on the Char-Broil Big Easy. The ham gets a nice roasted flavor, a bit of a crispy outside, and a super-moist inside. This time I started with a 10 pound pressed ham, which I scored (a technique I need to practice) and then glazed as it cooked. No mess, no fuss, and mighty darned good in the end. The glaze has a bit of sweet and a definite kick to it. Chipotles not only add spiciness, they add a bit of smokiness, giving the ham an almost char-grilled flavor. Fantastic!

Some of the ham I sliced thick, to eat as ham steaks. Some I chopped for omelets. And most I sliced super-thin for fantastic sandwiches.

Also check out my spiral ham cooked on the Char-Broil Big Easy. Man, was it ever great too! My pepper onion beer sauce makes for a great topping for ham! 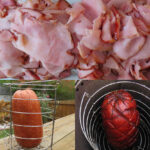