I have a rule about firing up my Weber Smokey Mountain Smoker: never leave any empty space. The fire’s already going, might as well smoke as much as you can. I had a few corned beefs smoking, which meant I had some room left over, so I threw on a bag of red potatoes. After a few hours the potatoes were tender, ready for step 2: smashing. Later, when it was time for dinner, I placed the smashed potatoes onto a super hot griddle along with a little oil to crisp them up. Man, were they ever delicious! Crispy on the outside, tender on the inside, with a hint of smoke. A great side dish. 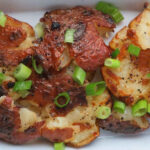 Man, were these absolutely delicious! Crispy on the outside, tender on the inside, with a hint of smoke. A great side dish.
Course Side
Cuisine American
Keyword crispy, potatoes, smoked
Prep Time 10 minutes
Cook Time 2 hours 20 minutes
Total Time 2 hours 30 minutes
Servings 4
Calories 159kcal
Author Mike