I usually smoke my ribs, but there are times when I’m more than happy to cook them in other ways. Usually, that means on the Char-Broil Big Easy. Once, heck, I even made them in the slow cooker! Gasp! This time I figured I’d try oven baked ribs, which really isn’t much different than using the Big Easy.

I ended up with tender, juicy ribs that tasted absolutely great. Of course, they do not have that smoky flavor I’d get on the smoker, cooked for 6 hours. But, I make up for that a bit by adding smoky ingredients like smoked paprika and using a smoky (hickory in this case) BBQ sauce at the end.

Although I did not include it in the recipe below, I’d consider adding a drop (and surely not much more) of liquid smoke to the foil before sealing the ribs. There’s already a good bit of great smokiness added by the smoked paprika so I wouldn’t go crazy with the liquid smoke. If you aren’t a fan of liquid smoke but want more smoky flavor, substitute smoked sea salt for the Kosher salt.

I used back ribs, though when I smoke ribs I almost always use spare ribs trimmed St. Louis-style. I wouldn’t use spare ribs in this recipe because I’d be afraid that the additional fat in them would almost end up ‘boiling’ the ribs in the foil. 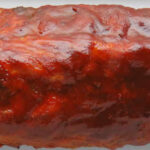