This honey-glazed ham on the Char-Broil Big Easy is my go-to approach for making pre-cooked hams, just like I have many times before. You’re not really cooking the ham, you’re just heating it and adding more flavor by adding a glaze. You can use the glaze that comes with your ham (if it includes one) but I prefer to make my own, being able to make it more for my tastes. Plus, that bag of frozen glaze kind of …. scares me.

This ham could not get any easier. It’s why I load up on those cheap spiral hams whenever I can. We can get a number of meals out of a single ham, from sandwiches to omeletes.

I used a smoked spiral-sliced ham for my honey-glazed ham. You can also use a whole ham, sliced or not. But you must use one that is pre-cooked. If it’s not sliced you’ll want to score it first with a knife so that the glaze adheres to the ham. If you don’t it will just roll right on off into the bottom of the foil pouch and just sit there doing nothing, not adding flavor or anything to your ham. 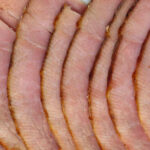