I should’ve bought more lemon pepper wing dust from Kosmo’s Q. Sure, I put it on wings. But I’ve found myself using it more and more on grilled vegetables. Like these planked lemon pepper asparagus. You can’t get much easier and you can’t get much more flavorful than this grilled side dish.

The seasoning adds a serious lemony peppery kick to anything. I’m not shy with it because I love it. You might want to start with less and see what you think. You can always add more. The asparagus will take on a great citrusy flavor with a hint of cedar and just the right amount of pepper. Perfect. 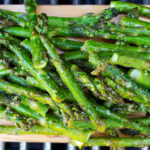 Kosmos Q wing dust contains enough salt so you won’t need to add any to the sprouts. You can add freshly ground black pepper if you like. Nutritional values do not include the wing dust.