I dream about lobster rolls. Real ones. Loaded with lobster. I’ll take them with or without mayonnaise. My poor man’s lobster roll is not the real thing. It’s not supposed to be. But it is supposed to get as close to the flavor of the real thing without spending a lot of money. And for me, it works.

My poor man’s lobster roll is enough to get me by until I can head to Caplinger’s Fresh Catch here in Indianapolis for a fresh lobster roll. But I can enjoy my imitation version without shame. I don’t even have to close the drapes so no one notices that I’m using imitation lobster! Heck, it’s tasty! 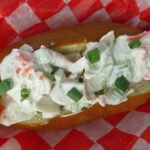