Visit my other site, For The Wing, for all things chicken-wing!

I normally roast my wings in my Big Easy or grill them over charcoal, so I was a little skeptical about this recipe for drunken BBQ chicken wings where the wings are slow-cooked in a Dutch oven. But, to my surprise, the final result was incredibly tasty and oh-so-tender. You’ll love the BBQ sauce on these wings. It’s a very traditional ketchup-based sauce with beer added in for a nice change.

To get a little crisp and color, I put the wings under the broiler for a few minutes after they were completely cooked. You can also cook these wings in a crockpot. You’ll still want to brown them under the broiler a bit before serving. Or better yet, toss them on a hot grill for a bit. 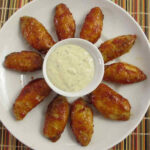 For the BBQ sauce:

To make these wings in a crockpot