Yeah baby! Back up the truck to some fantastic ham flavor! This southern honey glazed ham, cooked up crazy good on my Char-Broil Big Easy, was the epitome of easy to make. Using the new Better Basket I was able to fit a 10 pound ham into my Big Easy with plenty of room to spare. The glaze adds a wonderful sweetness and elevates this ham way beyond just a plain ole pre-cooked spiral ham. Tender and moist with a nice little light crunch around the edges, this is my kind of yummy!

I just glazed the ham, wrapped it in foil, and let it ‘get happy’ on the Big Easy for 10 minutes per pound. The Better Basket made getting the ham in and out a breeze. You can certainly use the standard basket that comes with the Big Easy. You might have to use a little more elbow grease getting it in and out of the basket. Also be careful that you don’t get a ham that is bigger than your basket!

I’ve also included the recipe for my favorite ham gravy. It has a nice pineapple flavor that compliments the ham perfectly. Just drizzle a bit over the sliced ham before serving. 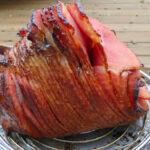 The Better Basket makes getting the ham in and out much easier.