Put it between two slices of bread and I’ll eat it. That’s why we have sandwich night (and day) here often. Sometimes that means a little work. I was a little rushed for time one evening, so I made this version of a steakhouse grinder Kraft. I was relatively skeptical how it would work out. Would the A-1 steak sauce be too overwhelming?

Well, no, is the answer! The A-1 complimented the vegetables perfectly, giving the sandwich a nice little twang that really, really worked for me. Melted cheese, sauteed onions and mushrooms to boot… you just can’t go wrong.

I have made this sandwich several times, changing up the meats and cheeses. Each time it was just what I was hankerin’ for! Interested in the awesome southwestern quinoa salad we had on the side? Click here for the recipe. 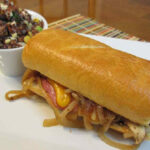 I have made this sandwich several times, changing up the meats and cheeses. Each time it was just what I was hankerin’ for!
Course Main
Cuisine American
Keyword sandwich, submarine
Prep Time 5 minutes
Cook Time 15 minutes
Total Time 20 minutes
Servings 2
Calories 213kcal
Author Based on a recipe from Kraft