Wow! I was so happy with sun-dried tomatoes on the Nesco Snackmaster Pro. The process was about as easy as you can possibly get. You end up with pliable but not leathery tomatoes that can be used anywhere jarred sun-dried tomatoes are called for. Like sun-dried tomato hummus, which I made immediately after the tomatoes were ready. I used roma tomatoes because they are cheap and don’t require me to remove the seeds. If you use bigger tomatoes you’ll have to seed them after removing the skins.

These sun-dried tomatoes on the Nesco Snackmaster Pro aren’t packed in oil like those in jars. And I opted to not season them at all, though you can surely add basil or thyme or whatever flavors you want. It takes a lot of tomatoes to make a batch of sun-dried tomatoes. I made a big batch, and froze the leftovers in vacuum-sealed bags in the freezer. 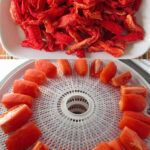