Here lately I’ve found myself watching The Best Recipes Ever on CBC. I didn’t really need to watch another cooking show, but the recipes on this one caught my eye. This potato and green bean salad is the first one I’ve made and although my version came out looking a bit different than the original, it was pretty good.

There are two things you have to keep in mind when making this potato and green bean salad. Some people have an aversion to cilantro, so you might want to use parsley instead, or at least cut back on the cilantro. Also, don’t just toss the dressing into the salad all willy-nilly. Add a little stir, taste, and check the consistency. It’s easy to add too much dressing (and I was dangerously close to having too much dressing on mine!). 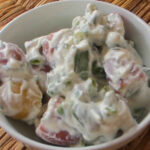