After visiting a favorite local food truck the other day, and seeing (and tasting) how great the hash they made was, I decided to make a copycat version of the spring hash, a sausage mushroom kale hash. My version is a little heavier on the sausage, but you can adjust it as you like. I also added a fried egg, but next time I’ll add a poached egg instead.

This sausage mushroom kale hash is an easy dish to make, and it has great flavor to boot. I used hot Italian sausage for a little extra kick. 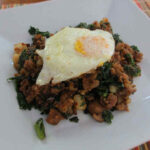