You could’ve just knocked me over with a feather. Silly me, having low expectations for a salad with roasted beets, dill and cucumber. I couldn’t have been more wrong. This salad is fantastic. It’s almost exactly like my favorite, my mom’s creamy cucumber salad, with the addition of roasted beets.

This roasted beet and dill cucumber salad is a great fall dish, and would be perfect served with a Thanksgiving turkey. I love the creaminess of the dressing with the cool crisp cucumbers, followed by that great earthy beet flavor, with a hint of sweetness from roasting them. 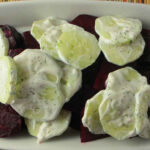