Smothered? Ok, so maybe I drowned them. But that’s ok, because these lowcountry smothered pork chops were divine. The chops were oh so tender. The sauce was oh so savory. And the topping? My favorite part, oddly enough. The key is to load up each forkful of pork with tons and tons of the peppers and onions then get ya some sauce. The perfect bite.

For a slight Cajun twist on this dish, season the chops with Cajun seasoning instead of the salt, pepper and cayenne. And add a few splashes of Louisiana hot sauce in when you add the chicken broth. 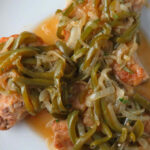