Back in my high school days I worked in a no-name sub shop. I made some mighty darned good sandwiches if I do say so myself. But honestly, nothing I made was as good as this copycat Jason’s Deli California Club sandwich. First, we didn’t make sandwiches on croissants, which give the sandwich such a nice light buttery flavor. And I had no idea then what alfalfa sprouts were. Now I love them on a sandwich, along with guacamole. This sandwich would’ve been a big seller at the sub shop where I worked.

I used a spicy guacamole to offset some of the sweetness of the croissant in my copycat Jason’s Deli California club sandwich. You can use ‘normal’ guacamole instead, or try my copycat of Jimmy John’s avocado sandwich spread instead.

I also could not find alfalfa sprouts at any of the grocery stores near our house. None of them. In fact one doesn’t carry sprouts any more at all. Luckily I found some bean sprouts. They aren’t the same thing as alfalfa sprouts but they did add a similar texture. 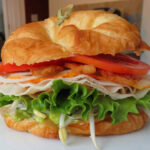