Making St Louis-style ribs on a gas grill is something I’ve been wanting to do for a while now. Yes, I have charcoal grills and I have a smoker, but not everyone else does. Which made me wonder… can it be done? Will they be as good as the ribs I cook on my other grills? Well, once I get something in my head, it’s not going away until I do it. And so I did. And you know what? These ribs were AMAZING!

Yes, I said it. Ribs cooked on a gas grill are fantastic. No, you can’t get that deep smoky flavor that you get from smoking them for 5 hours. But you get close. And you still get terrific, tender, moist ribs. I thought they were great.

I used my Weber Summit S-670 grill. It’s a large grill, to say the least. You don’t need to have such a big gas grill to make these ribs, but you do need one that’s big enough to hold the ribs and one that you can over indirect heat on. That means that the ribs need to sit away from the heat source. You want the spot where the ribs are to be around 250 F. And not much more. That’s essentially the same temperature as most people smoke ribs so you’re halfway there.

Above you can see my initial setup. I had three burners lit: the two furthest to the right that you can see and the one under my smoke box. I filled the smoke box with apple wood pellets. If you don’t have a smoke box you can use a foil packet filled with wood chips. Just poke a few holes in it and put it over a lit burner. You’re not going to get a lot of smoke flavor, but a bit. Be happy with it. You can make up for it quite a bit by using a BBQ sauce that has a bit of smoke flavor to it.

I found that my ribs were a bit too far away from my heat source (I was running around 200 F), so I moved them one burner to the right. I still only had the three rightmost burners lit. You can see my trusty oven thermometer in the picture. Get one (or two) and you’ll never regret it.

Once you get your gas adjusted so your temperature is 225-250 F you don’t really have to mess with it any more. This was my first time doing this, so I had to tweak where I had the ribs and my burner settings. After that I nailed 250 F for hours without any adjustments. Now that I know the right placement and gas knob settings, I’ll be able to make these ribs again and again without any fuss at all.

You will be totally happy with these St Louis-style ribs. I sure was. You might have to adjust the process a bit for your grill to get the right temps but once you do you’ll be making great ribs time-and-time again. I recommend taking notes on your setup so you can use the same process the next time.

You can also make delicious St Louis-style ribs on a smoker, Char-Broil Big Easy and even a Vortex! 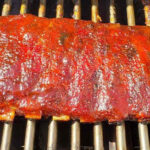 Yes, I said it. Ribs cooked on a gas grill are fantastic. No, you can’t get that deep smoky flavor that you get from smoking them for 5 hours. But you get close. And you still get terrific, tender, moist ribs. I thought they were great.
Course Main
Cuisine American
Keyword gas grill, ribs
Prep Time 15 minutes
Cook Time 4 hours
Resting time 10 minutes
Servings 4 servings
Calories 700kcal
Author Susie Bulloch