What’s better than spiral ham? Bacon-glazed spiral ham, of course. It’s spiral-ham-sale-time here, so I backed up the truck and grabbed a nice big smoked ham. Of course, they’re easy to reheat. And just as easy to glaze during the last 30 minutes. The bacon glaze adds a bit more smokiness, but also some sweetness, a little tartness and a little tang thanks to two different kinds of mustard.

You can substitute pretty much any jelly you want, but I’d stay away from ‘darker’ ones, such as blueberry or the like. Go for lighter colors. And don’t be afraid to use a spicy jelly such as jalapeno pepper jelly. You may also want to double the amount of bacon-glaze, serving any leftover glaze as a drizzle over the sliced ham when you serve it. Bacon-glazed spiral ham is a wonderful thing and more glaze is… more wonderful! 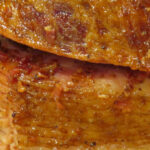