Bacon goes with just about anything. And it definitely makes this bacon potato salad pop even more. Eating this potato salad is almost like eating a baked potato. In fact, I think the next time I make it I’ll add some cubed sharp cheddar cheese.

I kept the skins on the potatoes. I think it adds to the flavor (and makes it even more like a baked potato!). You do have to be careful (gentle) folding the ingredients together or you’ll lose most of the skins off of the potatoes. 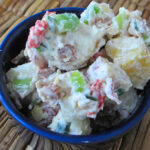