I’ve made my share of stuffed mushrooms. All sorts of different ingredients have found their way into my mushrooms. But never artichokes. These bacon-wrapped mushrooms with artichokes are divine. They’re different and they’re highly addicting. Pearl onions? In a mushroom? Brilliant!

If you can’t find fresh pearl onions (I was surprised that I did), you can get away with frozen (thawed) ones. Or you can just add a bit of chopped white onion. The onion does add a nice contrast to the creamy artichokes and bacon. I wouldn’t skip adding some sort of onion. You’ll love bacon-wrapped mushrooms with artichokes just as much as we did! 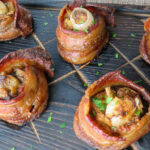