I smoked a big ole bologna chubb not long ago. Of course I ended up with a lot of bologna. I ended up slicing it nice and thick, freezing some of it for later. Later as in ‘for the best fried bologna sandwich ever’ later. This is the sandwich bologna was invented for. Fried bologna with just a little bit of crunchy char around the edges. Melted gooey cheese. Crunchy BBQ chips and lettuce. And the tang of pickled chow chow. Mustard. Mayonnaise. All on white bread.

You must use white bread when you make a fried bologna sandwich. It’s a law. Or should be. Let’s face it, you didn’t make this sandwich because of it’s organic farm fresh ingredients. This isn’t fru-fru, this is a big ole honkin’ sandwich that you’ll love. 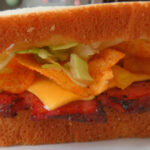