Just finished off that great Caribbean jerk chicken you cooked on your Big Easy? Well, it’s time for dessert! Time to make Brazilian pineapple on the Char-Broil Big Easy! And man, oh man, what a delightful treat it is, too! Deliciously sweet pineapple, brushed with coconut milk and sprinkled with cinnamon-infused sugar. Roasted to perfection.

Brazilian pineapple on the Char-Broil Big Easy can be sliced and eaten as-is. Nothing else is required. But it’s even better topped with some cooling whipped cream or a scoop of ice cream. This dessert is so good that we made it twice in one week!

You start by cutting the ends and rind off of a pineapple. Do not remove the core! Then you remove the eyes in a spiral pattern. I never realized that the eyes grow at about a 45 degree angle on the sides of the pineapple. Just remove them using a sharp knife, creating a nice little ‘canyon’ to hold the coconut milk and cinnamon sugar.

I lined a bunk-bed basket with foil to make cleanup easier. Lowered it into the Big Easy and let it go until it started to brown, about 30 minutes. Your time may vary, and you may want your pineapple to be a bit more caramelized. Use your own judgement. I don’t think you can go wrong no matter what!

I let the pineapple rest a bit before I sliced it. It’s pretty darned hot right out of the Big Easy! And if you don’t have a Big Easy (and really, you should have at least one!) you can also make this recipe using a gas or charcoal grill with a rotisserie.

You’ll love serving this pineapple with my Huli-Huli chicken. Also try my Bloomin’ apples, also made on the Big Easy! 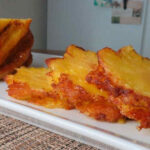 Depending on the size of your pineapple and how heavy handed you are with the spices, you might have enough of the cinnamon sugar mix to make 2 pineapples.