Sometimes what you think might be a mistake can end up being one of the best things that you have ever done. I ordered some pork shanks from our local butcher. My goal was to make pork wings, which are made from the shank. Well, I didn’t explain myself correctly and what I ended up with was a big bag of shanks that had been cut in half, which definitely weren’t going to work for pork wings.

After a quick glance around the web and I found tons of great recipes for braising shanks. I also found the idea of smoking them and using them in the place of smoked hocks. Now that’s an idea I can get excited about because I love hocks and beans.

So I took 8 of the shanks (trust me, I have plenty more), brined them for a while and then smoked them. The end result was tender, perfectly smoky-flavored shanks that were amazing in a big pot of beans.
I wouldn’t hesitate at all to get more shanks from my butcher for no other reason than to smoke them. They’ll be great this fall and winter in soups and stews.

Smoked pork shanks also fit in well with my ‘no empty space on the smoker’ rule. That rule states that if you’re going to fire up your smoker you must use up all available room. No point in wasting smoke. Shanks are the perfect size for using up valuable smoker grate space in my opinion. 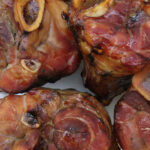 I took shanks, brined them for a while and then smoked them. The end result was tender, perfectly smoky-flavored shanks that were amazing in a big pot of beans.
Course Main
Cuisine American
Keyword pork, smoked
Prep Time 3 days 1 hour
Cook Time 5 hours
Total Time 3 days 6 hours
Servings 8 shanks
Calories 102kcal
Author Based on a recipe from Playing with Fire and Smoke

For the smoke pork shanks

For the smoked pork shank

This recipe can also be used to make fantastic smoked ham hocks.