It only took me one time making potato wedges using my Vortex BBQ on my Weber charcoal grill to turn me into a full-blown addict. I use my Vortex a lot, to say the least. Wings, fried chicken, mostly but now also for a fantastic side dish. These Kickin’ Cajun potato wedges bring a nice kick, crispy skin, and cream potato-y insides. Get the ketchup out, if you want, or eat them straight-up. You can’t go wrong with them, that’s for sure!

The key to these Vortex potato wedges if the Kickin’ Cajun seasoning from Kosmos Q. Normally used as a wing dust, I’ve found that it’s much, much more than that. Like on these potatoes. It brings a bit of heat. Actually, quite a bit the more you use. So give it a (small) taste first to see how much kick you want. 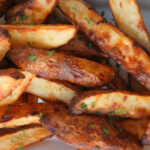