I believe that the first time I had a Denver omelet was on a Delta airlines flight when I was a kid, long long ago. Even at a young age I knew i was hooked on the combination of cheese, ham, onion, mushroom and peppers. These Denver omelet nachos takes those long-time favorite flavors and put them on top of my other favorite: crispy tater tots. Yep, it’s a marriage made in heaven for sure. And for a delightful twist, a lightly spicy cream sauce on top cuts through some of that richness and makes the world a wonderful place again. Maybe it doesn’t do that but it is mighty darned good!

I think of these Denver omelet nachos as the perfect grownup version of the dish I had as a kid. Nothing wrong with the old way, either, definitely not. But this is a great twist on a long-time favorite. And as a bonus, Anita declared this to be one of the 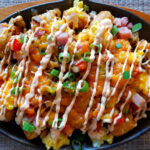