I wish I could remember exactly where I came across this idea for pepper jack cheese-stuffed smoked bologna. I’m pretty sure it came from Smokin’ with Myron Mixon: Backyard ‘Cue Made Simple from the Winningest Man in Barbecue. But, I could be wrong. Regardless, I love smoked bologna, but this approach takes the idea to a new level. The addition of cheese inside the bologna chub adds a nice flavor and well, it looks cool. I then rubbed the chub with yellow mustard and then sprinkled it with our favorite spicy rub and smoked it for 3 1/2 hours on my Weber 721001 Smokey Mountain Cooker 18-1/2-Inch Charcoal Smoker. I then brushed it with my favorite store-bought BBQ sauce. 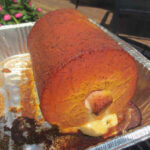