Sometimes you want to change things up from the usual smoke – ribs, pulled pork and the like. I was feeling that way the other day when I fired up my Weber Smokey Mountain Charcoal Smoker. So, I ran down to the grocery store and picked up a 5 pound roll of bologna. The woman behind the counter wanted to know how I wanted it sliced. She looked at me rather puzzled when I told her I wanted the whole thing as-is. I told her I was making smoked bologna and that it was going to be a happy day.

Scoring the bologna can be challenging, but you don’t have to worry if it doesn’t come out perfect. It lets the smoke in a bit better and gives the BBQ sauce a place to hold on to. You can see my Red Chile smoked bologna for further proof you don’t have to get all fancy when you score your bologna.

Sliced thin, smoked bologna is the best bologna you’ll ever have. It has a light smoky flavor and makes for absolutely excellent sandwiches. I used Cashman’s BBQ sauce on the bologna and really liked it. Our neighbor’s daughter brought it to us from Defiance, OH. I wish we had it here in Indy! (I think they no longer exist, so substitute your favorite sauce!)

Also try my pepper jack cheese-stuffed smoked bologna and if you’ve never made it, I highly recommend smoking some Spam next time you have your smoker going! 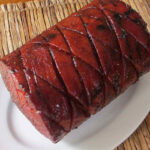