I love smoked chicken. Mostly white meat. For dark meat I prefer grilling. My quest is to make pulled chicken BBQ. And often.

Nothing is easier to do than to smoke a few chicken breasts. Bone-in split breasts give the most flavor without having to worry about the meat getting too dry or tough. Unlike smoking a pork butt or beef brisket, chicken cooks quickly without a lot of prep or fancy rubs, mops, or injections (though you could certainly inject a bit more flavor if you desired, and some folk like brining theirs first).

I loaded up my Weber Smokey Mountain (WSM) cooker with split breasts. I removed the skin from the chicken first because it isn’t going to crisp when you are smoking low-and-slow. All the skin does is prevent the smoke and salt and pepper from penetrating the meat. So, off with it! I prefer the WSM cooker because I believe that cooking chicken over a water pan results in a more tender, juicer meat so I don’t worry about removing the skin and having dry chicken.

After the chicken is cooked and cooled I pull or shred it and use it in tons of recipes, like simple pulled chicken BBQ sandwiches. Just add a bit of your favorite BBQ sauce and slap it on a bun, add some chips on the side, and you’re ready to eat! 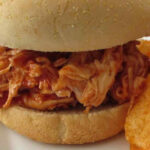 Nothing is easier to do than to smoke a few chicken breasts. Bone-in split breasts give the most flavor without having to worry about the meat getting too dry or tough.
Course Main
Cuisine American
Keyword barbecue, BBQ, chicken, sandwich
Prep Time 5 minutes
Cook Time 2 hours
Total Time 2 hours 5 minutes
Servings 4
Calories 258kcal
Author Mike