Sure, I’ve made bacon-wrapped jalapeno poppers. A lot of times. And I love them. But not everyone loves a little kick in their appetizers like I do, so that’s when these sausage-stuffed peppers on the Char-Broil Big Easy take the stage. The peppers get a nice little char on them. They have a little sweetness to them. The sausages bring a wonderful smokiness, and they kind of ‘pop’ when you bite into them. That’s a bit unexpected. The cream cheese? Well, it’s creamy. All wrapped in bacon goodness with a sprinkle of rub.

I used the rub for my root beer can chicken on these sausage-stuffed peppers on the Char-Broil Big Easy. The rub has a little smoky flavor to it, along with a bit of garlic and just a very, very small hint of spiciness. Not enough to offend those that prefer mellower snacks.

Also try my Southwestern-stuffed peppers made on the Big Easy. 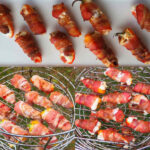 Not everyone loves a little kick in their appetizers like I do, so that’s when these sausage-stuffed peppers on the Char-Broil Big Easy take the stage.
Course Appetizer
Cuisine American
Keyword Big Easy, Char-Broil, peppers, sausage, stuffed
Prep Time 10 minutes
Cook Time 25 minutes
Total Time 35 minutes
Servings 20 appetizers
Calories 56kcal
Author Based on a recipe from Taste and Tell

You’ll need a Bunk Bed basket to cook 20 peppers at once.