This Montreal Steak-seasoned smoked bologna was destined for greatness, and that greatness was in the form of a fried bologna sandwich. The bologna takes on such a great flavor from the seasoning and smoke. You’d never think it was ‘just’ bologna because it isn’t. It’s something special, something amazing.

I slice my Montreal Steak-seasoning smoked bologna thin, for sandwiches. Because I usually end up with a lot of slices (more than I could ever use in a few days), I freeze it for later use. To maximum quality, I put the slices into vacuum-sealer bags and seal them. But, to make sure the slices don’t stick together I put burger patty paper between each slice.

Of course you can use whatever seasoning you prefer when smoking bologna. I just happened to be craving Montreal Steak for some reason. Probably because I ran across a jar of it in my spice rack and thought…. hmmmm… what can I use this on? 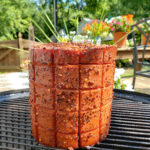