I am a certified, card-carrying member of the Coleslaw Addicts Club, also known as the CAC. Ok, I made that up. But if there was such a club I’d be in it and I’d probably be it’s president. Because I can eat any kind of slaw, any time, any where. I almost always order slaw when eating out. Now, true, I’m not sure if coal miner’s ate a lot of slaw, but if their slaw was anything like this from Tub’s Fine Chili (sadly now closed) they probably did. Buttermilk and vinegar do make this one wonderful slaw. Different than your normal creamy slaw. And different than your normal vinegar slaw. It’s like having the best of both in one.

This recipe for Tub’s coal miner’s slaw might make a bit more dressing than you want. That wasn’t the case for me, but I don’t mind a nice ‘wet’ slaw. I’d say add some of the dressing and see what you think. It’s a lot easier to add more later than it is to take it out. 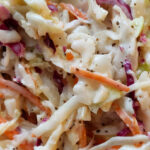