These chorizo fried potatoes are so good you almost don’t need anything else with them. I had a batch with breakfast, but you can also use them in tacos or tortillas – just add a little shredded cheese!

I love Mexican chorizo. Quite often I mix it half-and-half with ground beef for a more kicked-up dish than using just plain ole beef.

When I first started cooking I kept running into recipes that called for chorizo, but they didn’t say which kind. Now it’s obvious to me, but there’s a mighty big difference between Mexican chorizo (a spicy ground meat mixture) and Spanish chorizo (a dried, salami-like spicy meat). I love them both, though. 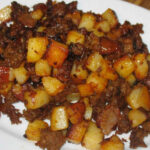 Great as a side or on tacos or tortillas.
Course Side
Cuisine Mexican
Keyword potatoes, spicy
Prep Time 10 minutes
Cook Time 30 minutes
Total Time 40 minutes
Servings 6
Calories 287kcal
Author Based on a recipe from Chef Valladolid