This is my go-to stuffing for a whole lot of dishes. I use pork chorizo stuffing in baked potatoes, on grilled potato skins, in stuffed mushrooms, dips, omlets, you name it. It’s very versatile and very tasty. It has just enough spicy kick to it but not so much as to overwhelm no matter how I use it.

Here are my tasty mushroom caps with pork chorizo stuffing. Grilled on a cedar plank for even more outstanding flavor.

This recipe makes a big batch of stuffing. I divide it into smaller portions and freeze it so I always have some on hand. 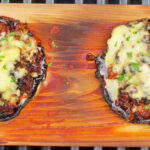