Oh pinch me. Just pinch me. I thought I was dreaming when I first took a bite of fire-eater reverse-seared prime rib. Beyond flavorful. Beefy. Juicy. Cooked perfectly even throughout. And just a hint of spicy from the fire-eater rub. Truly an epic dinner, and just enough for the two of us. And fortunately, this approach can easily be scaled to any size roast that will still fit on your grill.

Reverse-searing requires that you cook the meat fully over a fairly low heat. This ensures that the meat cooks evenly. With high heat the outer edges will cook first, before the inside. Once the meat is almost done the grill is cranked to absolutely maximum temperature and the roast is then quickly seared on each side. This adds a great crust and grill flavor. Perfect.

If you are hoping to get some drippings to make au jus to go with the roast, set an aluminum pan underneath the meat while cooking. You’ll have to use a pan that is only as big as the roast, as the drippings will burn if the pan is too close to the heat source. I didn’t have a pan that would work, so instead I made my just-as-good homemade au jus.

Also try my grilled rib roast with gravy. Same idea, but not reverse-seared or as spicy but oh so good. 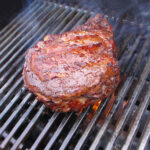 Cooking times will vary on the size of the roast. Count on around 20 minutes per pound, plus at least 30 minutes resting time. I made this on a gas grill because it’s easier to get it to a high enough temperature to sear the meat in the end. If you are using charcoal you’ll want to have a chimney or two of lit, hot coals on hand to help speed up the searing process.