I’ve made mustard-based BBQ sauces before, but nothing even comes close to this Atomic BBQ sauce. It takes mustardy sauces to a whole new place, thanks mostly to the addition of pickled banana peppers. Of course, there’s a pretty good kick to the sauce. It is called Atomic BBQ sauce for a reason. Perfect on a rack of smoked St. Louis-style ribs, and outstanding on a pulled pork sandwich.

For a little extra kick, substitute spicy banana peppers. Don’t want the heat? Substitute jalapenos for the habaneros. You’ll still get a kick, but it’ll be tame enough for just about anyone. For even less of a kick (but still some) try my hot pepper jelly BBQ sauce too.

This sauce is a great thing. Definitely my new favorite when it comes to non-ketchup-based BBQ sauces. 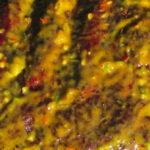