I’m almost too giddy to even write this post. Every time I look at the picture of grilled buffalo mac-and-cheese I flash back to the first time (of many) that I made it. Oooey gooey creaminess with a slight char, drizzled with a spicy homemade Buffalo wing sauce. Make no mistake about it, this is some fantastic macaroni-and-cheese.

There are two things you have to be mindful of when grilling Buffalo mac-and-cheese. First, make sure your mac is set up good before cutting it. You want it a little solid, a little thick. Second, you want to be careful flipping it on the grill. When the cold mac gets hot it’ll want to return to it’s original creamy state, and fast. Don’t mess around, flip it, char it, and get it on a plate. Time’s a wastin’!

Did you know you can also grill cornbread? It’s crazy good too!  You can also smoke your mac-and-cheese and really impress everyone. 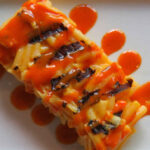 For the macaroni-and-cheese (if using made-from-the-box mac, make it per package instructions and skip to step 6)