I am kind of addicted to these grilled potato skins. I’ve always loved potato skins, but I admit, I don’t think about them enough to really make them that often. Until now, when I decided to start making them on the grill. They’re one of the easiest appetizers (or side dishes) you can make, and they’re super tasty. These chipotle pulled pork grilled potato skins are seriously loaded with chipotle smokiness and heat along with one of my favorite things of all time, pulled pork.

There’s no such thing as a bad bite when you dig into these potato skins. You can also substitute pulled BBQ chicken or chopped smoked brisket, but make sure you keep that chipotle theme going by using a chipotle-infused BBQ sauce. 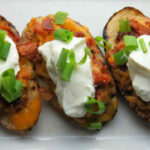