I don’t know Ross, and I’ve never been to his pool room. I came across this recipe for hot bologna sauce on a grilling group on Facebook, and instantly knew it was something I needed to make. Bologna burgers (or sandwiches) are an awesome thing, and something I love to make, from Ross’ Pool Room Bologna burgers to my smoked bologna sandwiches and Cleveland fried bologna sandwiches. Ross’ Pool Room hot bologna sauce brings a nice spicy, tomato-based punch to bologna burgers. It’s also great on hot dogs, hamburgers, and grilled chicken.

Apparently Ross’ Pool Room was once (I cannot find it on Google) a place in West Virginia. It sounds like my kind of place. Pool, music, and great simple food, like bologna sandwiches or burgers.

I adapted this recipe for Ross’ Pool Room hot bologna sauce from what appeared to be the restaurant’s original recipe, which made a big batch. You’ll still get 2 cups out of my version, plenty for a number of sandwiches or southern bologna burgers.

If you happen to be in Nashville, Indiana, I recommend that you swing by Our Sandwich Place on South Van Buren Street and grab yourself a Larry’s Triple Bologna and Cheese Triple Decker sandwich. Now, it doesn’t come with hot bologna sauce, but it’s a mighty respectable and tasty bologna sandwich for sure! 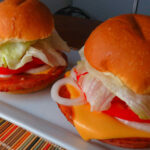