I can’t say that I eat a lot of bologna. But when I do, I do it up right. Now, there’s nothing wrong with a good ole slice or two of bologna on bread with mustard. In fact, they were a staple of mine back in the day when I fished and camped quite regularly. You can’t get any easier. But smoked bologna sandwiches are where bologna dreams of being.

Smoked bologna is just about as easy to make. No fancy brines. No fancy wood. Just a little seasoning and onto a smoker at 250 F for 1 1/2 hours. You could use your grill too, just add some smoking wood and cook over indirect heat.

I had the guy behind the deli at my local grocery store cut chub bologna thick, about 1/2″. I then cut slits around the edges. This prevents the bologna from curling up. A little Cajun seasoning, and 1 1/2 hours later, they were done.
The sandwiches were straightforward. Lightly toasted buns, thin sliced Vidalia onion, mustard, and dill pickles. These smoked bologna sandwiches were delicious. 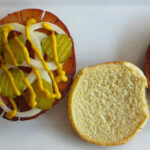