Anita proclaimed this to be the best egg salad she’s had. I’m surely not going to argue with her, either. It’s light, fluffy and tasty, and goes perfectly with thin-sliced ham. Nothing fancy here, just great ham and egg sandwiches. The original recipe was meant to make finger sandwiches, which you could do, but if I’m coming I’d prefer the full-sized version, please!

I chopped the ham to give it more of a shaved ham feel, a little lighter than just sliced ham. I think it went better with the airy egg salad. You don’t have to do that, and in fact, you really don’t need the ham at all. No matter how you do it, these ham and egg sandwiches are a delight. 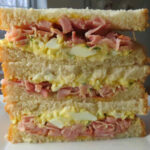