This Delta slaw is by far my favorite go-to slaw. Although I sometimes eat it as a side, it most often finds it’s way onto pulled pork or Sloppy Joe sandwiches, or on hot dogs. Despite being a vinegar-based slaw it has a nice sweetness to it. It also contains celery seed (and a good bit of it too), which is also one of my favorite flavors. I love everything about this slaw.

Depending on how I’m serving my Delta slaw (as in, how quickly I’m going to devour it), I often keep the slaw ingredients separate from the dressing until just before serving. That was the slaw doesn’t get too soggy, which will happen after three or more days in the fridge. Keeping the parts separate means I can easily get a full work week’s worth of slaw out of a batch! 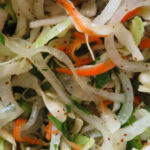