This BBQ Shack slaw reminds of me just that: the kind of great slaw you can get at just about any respectable BBQ joint across this country. Nothing fancy, but cool and fresh, the perfect side dish for a big ole pulled pork sandwich. Or, the perfect topping for any BBQ sandwich or grilled hot dog.

I chopped the slaw ingredients in my food processor, which can be a dangerous thing. I swear it has a big block V8 engine in it. In no time it’ll take a chunk of cabbage and turn it into sawdust. I have to be careful. I had actually intended for this BBQ shack slaw to be a lot more chunky than it came out, but it was still delicious.

Next time I’ll either chop the ingredients by hand or just buy a bag of pre-chopped slaw mix so I don’t have to be so careful with my food processor.

Also try my Delta slaw and my Arkansas slaw. 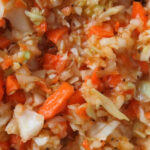