I’m usually a crispy-hash-browns kind of guy. I like the potatoes to get that nice little crust on them.  This time I decided to go another route with frozen cubed hash brown potatoes. These slow cooker creamy hash brown potatoes are rich and tasty. They are the perfect breakfast side, whether breakfast is in the morning or for dinner.

For a little kick to your slow cooker creamy hash brown potatoes add diced roasted jalapenos, or use a pepper jack cheese instead of the Colby jack. You can also substitute cayenne pepper for the paprika. It’ll still add the (needed) color and a little spiciness. 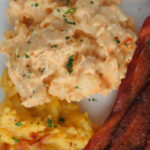