Anita and I are always on the lookout for a great, easy recipe for a dish she can take with her to work for her lunches. This Arkansas slaw has quickly become a favorite. It’s one she makes often and never tires of, and that’s a major plus.

On the surface, this Arkansas slaw is pretty much your standard slaw. But, it’s the addition of apple and celery that really make it different. Super crunchy, with a great dressing, it holds up for days, making it perfect for those workweek lunches, a picnic, or a family get-together.

I use pre-packaged slaw mix almost every time I make a slaw at home. Yeah, I could grab some cabbage, some carrots and whatever else and chop it myself, but those little bags are usually cheap, priced nicely, and always look good in the grocery case.

I lived in Arkansas for a number of years and for the life of me I don’t know what makes this ‘Arkansas Slaw’. Maybe it’s just called that because it’s amazing… like Arkansas! There! I figured it out! 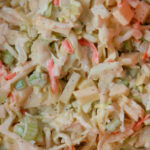