Boy, talk about something that flew off the table so fast that I was starting to wonder if we’d been robbed. We all thought that this copycat Red Lobster Cheddar Bay biscuits was even better than the restaurant favorite. They aren’t quite as crumbly. They held up to dunking in pot roast gravy, and that’s saying something. Granted, you probably can’t find pot roast gravy at Red Lobster.

I admit that when I made these copycat Red Lobster Cheddar Bay biscuits that I used a bit more parsley than the recipe below calls for. The biscuits are a little sweet (I’m not saying that in a bad way). The parsley gave a nice little herby contrast to that. Next time I might try cutting back on the parsley, but increase the cayenne. I do like a little heat!

These biscuits are great for soppin’ up the broth from my NOLA smoked shrimp. 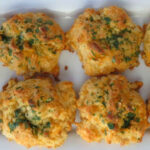